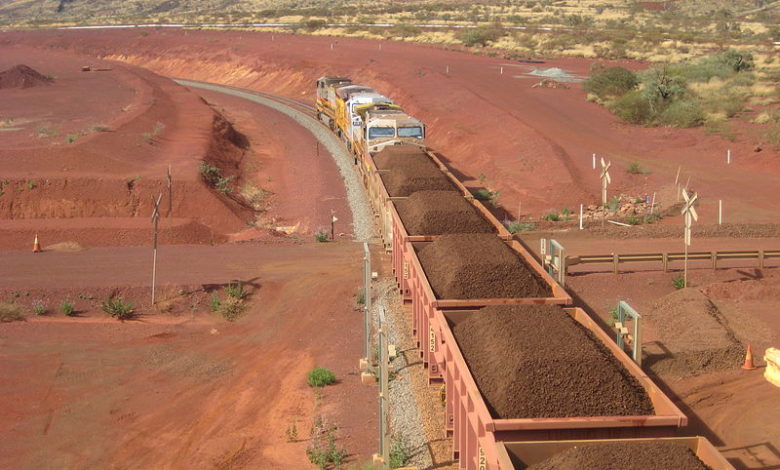 Iron is the most common and most-used metal in the world by both tonnage and purpose.

Iron ore is a mineral substance from which the which metallic iron (atomic symbol, Fe) can be extracted. It is the most-used metal by both tonnage and purpose. Iron is usually found in the form of siderite (FeCO3), goethite (FeO(OH), hematite (Fe2O3), limonite (FeO(OH)·n(H2O), or magnetite (Fe3O4). The two most important iron oxides in these deposits are hematite and magnetite. Ores containing high quantities of hematite or magnetite are known as "natural ore". These ores can be fed directly into an iron-making blast furnace.

The origin of iron can be ultimately traced to formation through nuclear fusion in stars. Extraction of the metal dates back to 2000 BC, originating in the regions of Persia and Anatolia. However, there is evidence that meteorites were used as a source of iron before 3000 BC. When iron making was established, two types of furnace came into use- the bowl furnace and the shaft furnace. Bowl furnaces were constructed by digging small holes in the ground that allowed for airflow from a bellows via pipe or tuyere. The stone-built shaft furnace relied on natural draft. Smelting involved creating a bed of red-hot charcoal, followed by the addition of charcoal combined with iron ore.

In the early Iron Age, wrought iron widely preferred, save for the Chinese, who preferred the application of cast iron. Little change in the methods of iron-making occurred until the 15th century with the introduction of the blast furnace. A series of inventions that allowed furnaces to operate at temperatures high enough to melt iron led to the production of steel. it was not until the 1950s that potential substitutes for the blast furnace emerged.

Smelting reduction, an iron-making technique used in Norway in the 1920s involved the use of electronic furnaces. The technique grew to include methods based on oxygen steelmaking converters using coal as an additional source of energy. This technique became the subject of extensive research throughout the 80s.

Iron ores, usually rich in iron oxide, are rocks and minerals from which metallic iron can be extracted. Iron ore mining methods vary by the type of ore being mined. There are four main types of iron ore deposits worked currently: magnetite, hematite, pisolitic ironstone, and titanomagnetite deposits. Pure iron metal is silvery white in colour, strongly magnetic, very ductile, and has a melting point of 1,538° C (2,800° F). Pure iron is malleable and can be easily shaped by hammering. Apart from use in electrical applications, it is rarely used without adding other elements. It mostly appears in the form of iron-carbon alloys, like steel and cast iron.

Iron is the fourth-most abundant element in the earth's crust, making up about 5%. Many iron ore deposits are found in sedimentary rocks. Most of Earth's major iron ore deposits are in rocks formed over 1.8 billion years ago. Despite its abundance, metallic iron is unknown on the surface of the Earth except as iron-nickel alloys from meteorites and rare forms of deep mantle xenoliths.

The primary use of iron ore is in the production of iron. Most of the iron produced is then used to make steel. Almost all (98%) iron ore is used in steelmaking. Steel is used in a great variety of settings, including the production of automobiles, locomotives, rail infrastructure, ships, bicycles, building reinforcement, tools, and more. The remaining 2% is used to make black iron oxide, iron blue, radioactive iron, and powdered iron. These applications are used in a variety of services from metallurgy and medicine to pigments in plastic, cosmetic products, and more.

Iron ore is mined in about 50 countries. The world production of iron ore averages two billion metric tons annually. Australia is the world's largest producer of iron ore, with Brazil coming in second. Followed by China, India, Russia, South Africa, and Ukraine. The seven largest of these producing countries account for about three-quarters of total world production.

The production rate from the Pilbara region of Western Australia as of 2018 is approximately 900 million metric tons a year and rising, accounting for 36.1% of the world's exports. Major ports of iron ore export in the Pilbara region include Port Hedland, Port Walcott, and Dampier. In 2018 Brazil was responsible for 19.6% of the worlds iron production at 490 million tons.

In the United States, iron mining is estimated to have accounted for 2% of the world's iron ore output, producing about 49 million metric tons in 2018. Mining operations in the US consist of twelve iron ore mines with nine being open pit mines. In addition, there are also ten pelletizing plants, nine concentration plants, two direct-reduced iron (DRI) plants and one iron nugget plant operating as of 2014.

About 2.5–3.0 tons of iron ore mining tailings will be discarded for every ton of iron ore concentrate produced. According to statistics, there are up to 130 million tons of iron ore discharged every year. These tailings are high in other useful metals like cobalt, copper, and nickel, which can be used for road-building materials like pavement, cement, wall materials, and low-grade glass.

Steel is 100% recyclable, it can be reprocessed into material of the same quality again and again. Each recycled ton of scrap steel saves more than 120 kilograms of limestone, 740 kilograms of coking coal and 1,400 kilograms of iron ore.

Earth's most important iron ore deposits are found in sedimentary rocks. World resources of crude iron ore are estimated to exceed 800 billion tons containing more than 230 billion tons of iron. The extent of the accessible iron ore reserves is not known. Based on the 2% growth in demand per year, it had been suggested that in 2006 that iron ore could run out by the year 2070. Iron ore is the primary source of iron for the world's iron and steel industries. It is essential for the production of steel, which in turn is essential to maintain a strong industrial base.

Iron ore prices have been decided in closed-door negotiations between the small handful of miners and steelmakers, who dominate both spot and contract markets. Over the last 40 years, a benchmark was traditionally set depending on the first deal reached between these two groups. This benchmark was then followed by the rest of the industry.

In recent years, the benchmark system has begun to break down following a call for a shift to short term pricing from demand and supply chain participants. In an attempt to provide more transparent pricing, a number of clearing houses and financial exchanges have offered iron ore swaps clearing. The CME group, London Clearing House (LCH.Clearnet), SGX (Singapore Exchange), ICEX (Indian Commodities Exchange), and NOS Group and all offer cleared swaps based on iron ore transaction data provided by The Steel Index's (TSI).