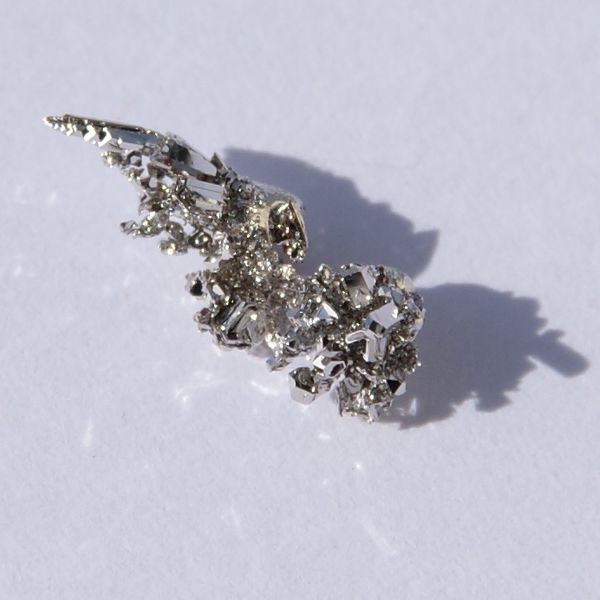 Palladium is rare, silvery-white metal with the atomic number 46 and symbol Pd. Closely resembling platinum, palladium is part of a group of elements referred to as the Platinum Group Metals (PGM). The PGM share similar chemical properties. Palladium has the lowest melting point and is the least dense of these metals. Other metals in the PGM include platinum, iridium, ruthenium, osmium, and rhodium.

Palladium was first isolated in 1803 from crude platinum by English chemist and physicist William Hyde Wollaston, who was then experimenting with the purification of platinum. The element was named after the newly discovered asteroid, Pallas, which takes its name from the Greek legend in which Pallas is mortally wounded in a playful fight with the goddess Athena. Wollaston had found the element through a process of dissolving crude platinum ore in aqua regia (nitric acid + hydrochloric acid). He neutralized the solution with sodium peroxide, precipitating platinum as ammonium chloroplatinate with ammonium chloride. Mercuric cyanide was added to form the compound palladium(II) cyanide, which could be heated to extract palladium metal.

Wollaston did not announce this discovery, but put the new metal on sale as ‘new silver’. This 'new silver' was later purchased and investigated by Richard Chenevix, who had deemed it an alloy of mercury and platinum. In February of 1805, Wollaston announced himself as responsible for the discovery of the metal and produced a full account of his findings. Prior to palladium's full discovery, the metal was known to miners in Brazil as early as 1700 CE, as ouro podre, or ‘worthless gold’. This worthless gold was in fact an alloy of palladium and gold.

The precious metal palladium, is soft and ductile when annealed. When coldworked, however, the metal's strength and hardness increases significantly. It does not react with oxygen at standard temperature, and does not tarnish when exposed to air. At room temperature, Palladium can absorb up to 900 times its own volume of hydrogen. When heated, hydrogen will easily pass through palladium. This property allows for the purification of hydrogen.

Palladium can be found as a naturally occurring free metal alloyed with gold and other platinum-group metals in placer deposits of North and South America, Ethiopia, Australia, and the Ural Mountains. Though rare, Palladium has been found uncombined in nature in Brazil, but most is found in sulfide minerals like braggite.

Although it was not very well understood at the time of its discovery, palladium now has many important functions in the modern technological age. Its low toxicity means that it can also have a variety of uses. The metal's lustrous appearance, along with its resistance to corrosion allows it to serve as an excellent replacement for platinum in jewelry and electrical contacts. Beyond this, palladium has many uses. In a beaten-leaf form, the metal is used for decorative purposes. Palladium may be alloyed with gold to produce white gold, and it is often used in dental alloys.

Palladium chloride was once prescribed as a tuberculosis treatment. This treatment, however, had many negative side-effects and was later replaced by more effective drugs. Today, the element's main use is its role in automobile catalytic converters. Often in combination with rhodium, palladium works to convert to convert carbon monoxide, nitrogen oxide, and polluting hydrocarbons in the exhaust to nitrogen, water, and carbon dioxide. Palladium is also used in ceramic capacitors within the electronics industry. Found in laptop computers and mobile phones, these consist of layers of palladium between layers of ceramic.

While it is possible to find pure palladium in nature, such deposits are rare. Production is also limited, with 84 percent of the global palladium supply being produced by two countries: Russia (44%) and South Africa (40%). The mine production in Russia reached an amount of some 91 metric tons in 2020.Other top producers of palladium are Canada (6%) and the United States (5%).

Palladium is generally commercially produced as a by-product of the refining of nickel and copper ores. As of 2020, the leading producers of palladium include Russia, South Africa, Canada, the United States, and Zimbabwe. The top consumers of palladium include North America and China, with the United States and China being the two countries with the largest global market shares of auto production.

As palladium is quite rare, there are very few palladium-producing regions globally, with few known economically viable bodies of ore. The global growth in mine supply is constrained. This is largely due to cost, infrastructure, and political issues within South Africa, the consistent palladium supply coming from Russia, and the known lack of new projects.

The automobile market is the most critical industry for palladium. Almost two thirds of global palladium usage is attributed to catalytic converter production. Other uses and sources of palladium demand include electronics, hydrogen purification, jewelry, dentistry and medical purposes, chemical applications, and groundwater treatment. Palladium is a key component of fuel cells, which are used to convert chemical energy from fuel into electricity. With three-quarters of the global supply of palladium coming from two countries, there is possibility for shocks in palladium supply and production.

How are Palladium Prices Established?

Currently, palladium is considered a precious metal. Those who wish to invest in precious metals can do so through the purchase palladium in the form of palladium bullion coins and bars. The spot price of Palladium is largely influenced by the following factors, rendering the price quite volatile. This includes changes in politics, environment, economics, and industry.

Demand for palladium is primarily driven by the growing automotive sector, which continues to grow, consuming almost 80% of the global supply. Demand has consistently outstripped palladium supply. As a secondary product of platinum and nickel extraction, miners have less flexibility to increase palladium output in response to rising prices. This shortfall is predicted to continue.

As an important precious metal, the investment demand and price of palladium bullion bars and coins, palladium futures contracts and live palladium prices are broadcast daily.