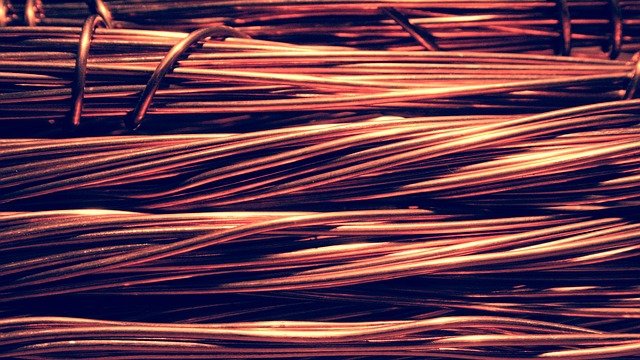 Copper is one of the most versatile and important metals of the modern age.

Copper is a soft, ductile, and malleable metal with high levels of electrical and thermal conductivity. These properties make it well suited for use in electrical equipment wiring, industrial machinery and building construction, including plumbing. Additionally, copper is often used as a constituent of various alloys. These alloys include cupronickel and sterling silver, which are used to make jewelry, coins, hardware, and more. Expressed as the symbol Cu, and the atomic number 29, this chemical element is one of the few metals that exists in a naturally directly usable metallic form - most other metals need to be refined and extracted from host minerals.

Known to some of the oldest civilizations on earth, the history of copper use dates back to 9000 BCE. Copper smelting was independently invented in multiple locations around the globe a early as 2800 BCE.

Alloying copper with tin to make bronze began about 4000 years after the discovery of copper smelting. Formerly termed the Chalcolithic period (copper-stone), the transition between the Neolithic period and the Bronze Age came with the use of copper tools with stone tools.

Copper was an important resource for the Romans, Greeks and other ancient peoples. It was first mined in ancient Britain as early as 2100 BC. Copper metallurgy thrived in South America around 1000 AD. The cultural role of copper is especially prominent in the form of currency. Copper was used in medical and health applications in ancient India and Egypt.

The United States produced between one third and one half the world's newly mined copper during the rise in demand for copper between the Age of Electricity and the Great Depression, spanning the 1880s to the 1930s. The introduction of open pit steam shovel mining and innovations in refining, flotation concentration and other processing steps led to mass production. The energy-efficient process Flash Smelting, first developed and applied in Finland in 1949, accounts for 50% of the world's primary copper production.

Copper, gold, and silver are in group 11 of the periodic table; they are characterized by high ductility, and electrical and thermal conductivity. Having a red-orange color with a metallic luster, copper is one of a few metallic elements that isn't gray or silver.

This metal does not react with water, but will react with atmospheric oxygen to form a layer of brown-black copper oxide which protects the underlying metal from further corrosion. A layer of green copper carbonate, also known as verdigris, is often seen on old copper structures such as roofing on older buildings.

Copper is present in the Earth's crust at a proportion of about 50 parts per million (ppm). In nature, it occurs in a variety of minerals, including native copper, copper sulfides, copper sulfosalts, copper carbonates , and as copper (I) or (II) oxides.

Major applications of copper include electrical wire and cable, electronics, electric motors, building and architecture such as plumbing and roofing, and industrial machinery. Mostly used as a pure metal, copper is sometimes put into alloys like bronze or brass when extra hardness is required. Copper paint has been used to control plant and shellfish growth on the hulls of ships and boats, and as nutritional supplements for agriculture. Alloys are usually preferred for machinery, but copper is occasionally used for parts.

Copper is also a key base metal for green and renewable products, and is used extensively in the production of electric vehicles, solar panels and wind turbines.

Pure copper is usually produced from a multistage process, starting with the mining and concentrating of low-grade ores that contain copper sulfide minerals. The process is then followed by smelting and electrolytic refining in order to produce a pure copper cathode. A growing share of copper is produced from acid leaching of oxidized ores. Copper has become a major industrial metal, ranking third after iron and aluminum by quantities consumed.

Most copper is extracted or mined as copper sulfides from large open pit mines in poryphyry copper deposits containing 0.4 to 1.0% copper. Inventories of these deposits are highly concentrated in North and South America. Sites include Bingham Canyon Mine in Utah and El Chino Mine in New Mexico in the United States, and Chuquicamata in Chile. The Escondida copper mine in the Atacama Desert in Northern Chile is currently the world’s largest copper mine by reserve. In North America, several open-pit copper mines are run by Freeport McMoRan (FCX). Freeport McMoRan is a mining company based in the Freeport-McMoRan Center, in Phoenix, Arizona. These mines operate in Morenci, Bagdad, Safford, Sierrita and Miami in Arizona, and Chino and Tyrone in New Mexico.

Copper can also be recovered through an in-situ leaching process. Currently being researched are Polymetallic nodules, an alternative source of copper for collection. Polymetallic nodules are located in the depths of the Pacific Ocean at approximately 3000-6500 meters below sea level. These nodules contain other rare earth metals such as nickel and cobalt. The top three producing countries of copper include Chile, Peru, and China. The top three reserve holders consist of Chile, Peru, and Australia.

Copper is a key component of green initiatives such as electric vehicles and clean energy. Demand is anticipated to remain high as governments continue to advance clean and renewable energy initiatives. Analysts project a global market deficit in 2021 with forecasts of an annual supply deficit, calling for investments by the industry to close this gap.

As the global economy expands, demand for copper has steadily increased. The main consumers of copper are China, Russia, the European Union, the United States, and Japan. Copper has been in use for at least 10,000 years, but more than 95% of all copper ever smelted or mined has been extracted over the last century. More than half was extracted within the last quarter of this period. The total amount of copper on Earth is vast, with around 1014 tons in the top kilometer of Earth's crust. However, only a small fraction of these reserves are economically viable with present-day technologies and prices. Estimates of copper reserves available for mining vary from 25 to 60 years, depending on the growth rate and other core assumptions. The future of copper production and supply is the subject of much debate.

Recycling is a major modern source of copper supply since the metal does not degrade or lose its chemical and physical properties during the recycling process. It is the third-most recycled metal, after iron and aluminum. Fabricating operations including copper smelters, brass mills, ingot makers, and refiners are all sources for recycled copper.

Analysts, journalists, and economists are generally more interested in macro-market prices for large quantities of investment or industrial grade metals. Manufacturers require prices specific to a particular form, grade, and quantity of metal, rather than that from large market settings.

The London Metal Exchange (LME) is the world center for industrial metals trading. The LME offers contracts with daily expiry dates of up to three months, weekly contracts of up to six months, and monthly contracts up to 123 months. It also allows for cash trading, offers worldwide reference pricing, hedging, and the option of physical delivery for settling contracts.

The Shanghai Futures Exchange (SHFE) was formed from the amalgamation of the national level futures exchanges of China. This includes the Shanghai Metal Exchange (SHME), a non-profit self-regulating corporation. Established in May, 1992, the exchange was created for trading in non-ferrous metals, currently trading metals including copper, aluminum, lead, zinc, tin, nickel.

How is copper price established?

The prices of individual metals, like prices for any commodity, are essentially determined by supply and demand. Current prices also consider the expectations and predictions of future supply and demand. Due to its widespread applications and demand in all sectors of the economy, copper prices are largely influenced by the health of the global economy. The copper spot price is affected by extraction and transportation costs, as well as supply and demand. Four of the biggest areas of determinants of copper prices include the US Housing Market, Emerging Markets, Substitution, and Supply Disruptions.

A decade later, the price of copper is again on the rise. In 2021 the price had a strong recovery, hitting an all-time high of nearly $5.00 USD/lb.