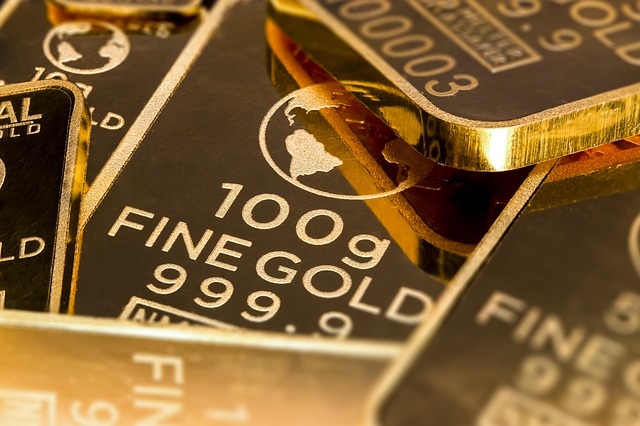 Gold is the most important and most widely traded precious metal in history.

In it's pure form, gold is a dense, malleable, ductile metal, with a bright slightly red-yellow tone appearance. Under standard conditions, it is one of the least reactive chemical elements. Gold often naturally occurs in the form of nuggets or grains in veins, rocks, and alluvial deposits. A relatively rare element, gold is considered a precious metal. Throughout recorded history, it has been used for jewelry, coinage, and other arts. With the symbol Au and atomic number 79, gold is one of the higher atomic number elements that occur naturally.

Gold appears to be the earliest recorded metal employed by humans that can be found free or "native". Dating back to the late Paleolithic period, c. 40 000 BCE, small amounts of natural gold have been found in Spanish caves. The first written reference to gold was recorded in the 12th Dynasty around 1900 BC., whereas the oldest known map of a gold mine was drawn in 19th Dynasty Ancient Egypt (1320–1200 BC).

Gold is one of the the earliest recorded metal used by humans. For a couple thousand years, gold was generally used for the creation of things such as jewelry and idols for worship. This was until around 1500 BCE when the ancient empire of Egypt, made gold the first official medium of exchange for international trade, often in the form of bi-metallic silver and gold coins. It was around this time that the Babylonians had first implemented a method called the fire assay, one of the most effective ways to test gold purity. The fire assay is still used to this day. At around 1200 BCE, the Egyptians discovered they could alloy gold with other metals in order to make it stronger and give it different color pigments. Egyptians had also begun experimenting at this time with the method of lost-wax casting, in which a gold sculpture is cast from an original wax sculpture. This is another process still used to this day.

Lydia, a kingdom in Asia Minor, began the first minting of pure gold coins at around 560 BCE. In 50 BCE a gold coin called the Aureus, was first issued by the Romans. In 1066 CE, William the Conqueror of Normandy, the first Norman King of England, begin a new metallic coin-based-system of currency in England. With the new system came the establishment of “pounds,” “shillings” and “pence”, with the "pound" being equivalent to a pound of silver. By 1284 CE, Great Britain issued their first gold coins, while the Republic of Florence issued gold coins under the title of Ducat.

In 1787 CE, the first U.S. gold coin was struck. The U.S. government passed the Coinage Act a few years later, which placed the country on a gold silver standard. In 1848, the California Gold Rush began, hastening the settlement of the American West. Since the discovery of gold in South Africa in 1868, 40% of the world’s mined gold has come from the nation.

Gold is the most malleable of all metals. It can be drawn into a wire of single-atom width, and then stretched considerably. A single gram of gold can be beaten into a sheet of 11 square feet (1 square meter) and gold leaf can be beaten thin enough to become semi-transparent in appearance.

Gold naturally appears metallic reddish-yellow in colour. Common colored gold alloys include rose gold, created by the addition of copper. Alloys containing palladium or nickel produce white gold, which is popular in jewelry. Fourteen-karat gold-copper alloy is almost identical in color to certain bronze alloys. Green gold consists of fourteen- and eighteen-karat gold alloys combined with silver, appearing greenish-yellow. Purple gold can be made by alloying with aluminum while blue gold is be made by alloying with iron.

Gold is resistant to most acids, though it does dissolve in aqua regia, a mixture of nitric acid and hydrochloric acid. Gold is insoluble in nitric acid, which dissolves silver and base metals. This property has been used to refine gold. Gold also dissolves in alkaline solutions of cyanide. This is used in electroplating and mining.

Gold is typically found in rock layers dating back to the Precambrian time, often occurring naturally in a metal solid solution with silver. Gold occurs as very small to microscopic particles embedded in rock. These particles are often together with quartz or sulfide minerals such as pyrite. The metal in a native state is also found in the form of grains, larger nuggets, or free flakes that have been eroded from rocks and end up in placer deposits. Gold can also be found in the world's oceans. Measured concentrations of gold in the Atlantic and Northeast Pacific are 10–30 parts per quadrillion or 50–150 femtomol/L.

The applications of gold are extensive, ranging from electronics and medicine, to jewelry, food, currency, and aesthetic purposes. About 10% of the world consumption of new gold produced goes to industry, with the most important industrial use being the fabrication of corrosion-free electrical connectors for computers and other electrical devices. Gold is used in dentistry, and has many other medicinal purposes, and can act as conductive coatings to biological specimens. In the 19th century gold had a reputation as an anxiolytic- a therapy for nervous disorders.

Gold has been widely used throughout the world as a form of currency, for easy indirect exchange, and for storing wealth in hoards. For exchange purposes, mints produce gold in the form of standardized gold bullion coins, bars, and other fixed units of purity and weight. Because of the softness of pure gold (24k), it is usually alloyed with base metals for use in jewelry to alter its ductility, melting point, hardness, color and other properties. Alloys with lower karat ratings contain higher percentages of copper or other base metals such as silver or palladium.

As stated by the World Gold Council, as of the end of 2017, there were 187,200 tons of stocks in existence above ground. The world's largest gold producer, as of 2017, was China with 440 tons. Within the same year, Australia placed as the second largest producer with 300 tons mined, followed by Russia with 255 tons. During the 19th century, gold rushes occurred whenever large gold deposits were discovered. The city of Johannesburg, South Africa was founded as a result of the Witwatersrand Gold Rush.

The volume of gold produced each year has tripled since the early 1970s, and the amount of gold bought annually has quadrupled with gold markets have flourishing across the globe. Over the last three decades, the annual volume of gold bought by investors has increased by at least 235%. Gold is now bought by a far more diverse set of consumers and investors than it ever has before.

The diverse uses of gold in jewelry, technology and by banks and investors means the rise of several different sectors of the gold market .The largest demand for gold in the world is jewelry, which consumes 50% of world production. Coins take up 10%, industry utilizes 9%, and the rest is for investments. Over the last decade, demand for gold since has moved east, driven by wealth creation, cultural affinity, and income growth in some of the world’s growing economies.

A bullion coin is a coin made from precious metals and kept as a store of value or an investment. Gold bullion coins are typically available in various weights, but are usually measured in multiples or fractions of 1 troy ounce. The gold bullion sells for a premium over the market price on the commodities exchange.

The London bullion market is a wholesale over-the-counter market for the trading of gold and silver. Trading is conducted amongst members of the London Bullion Market Association (LBMA), loosely overseen by the Bank of England. Most of the members are major international banks, gold bullion dealers and refiners.

Until the collapse of the Bretton Woods system of fixed exchange rates in 1973, gold played a central role in the international monetary system . Since then, its role has diminished, but remains an important asset in the reserve holdings of several countries. The IMF is still one of the world’s largest official holders of gold. The IMF holds around 90.5 million ounces (2,814.1 metric tons) of gold at designated depositories.

The landscape for wholesale gold trading is complex and constantly evolving. Major global trading centers include the London OTC market, the US futures market, and the Shanghai Gold Exchange (SGE), which make up for more than 90% of global trading volumes.

The gold standard is a monetary system backed by the value of physical gold. Often part of a bi-metallic system that utilized both gold and silver, the gold standard was popular throughout human civilization. Since the 1930s, the gold standard has been abandoned by most of the world's economies, which now have free-floating fiat currency regimes.

How are gold prices established?

The price of gold is determined through trading in the gold and derivatives market. A procedure known as Gold Fixing in London provides a daily benchmark price to the industry. The major areas that influence market conditions and price gold include: the demand for gold, the value of the US dollar, the amount of gold in the central bank reserves, and the desire to hold gold as a hedge against inflation and currency devaluation.

Precious metals, including gold, silver, platinum, and others are measured by troy weight and grams. The proportion of gold in the alloy is measured by karat (k), with 24 karat (24k) being pure gold, and lower karat numbers proportionally less.

The last century saw a diverse range of highs and lows in the price of gold, with the gold chart reading a wide range of prices. The first major gold rally occurred 1980 when the spot gold price per ounce rose to more than $650 USD/oz. Adjusted for inflation, the 1980 rally is still the record high for gold. In 2011, another major rally saw gold prices rise to more than $1,800 USD/oz. The spot gold price reached an all-time high (non adjusted) of more than $2,000 per troy ounce in August of 2020.

The current bid price, ask price, live gold price, and spot gold price per ounce is often updated, with new data and market conditions announced regularly. These factors are consistently monitored by gold dealers and investors through the gold price chart, which monitors past and current gold prices, including the gold price today.