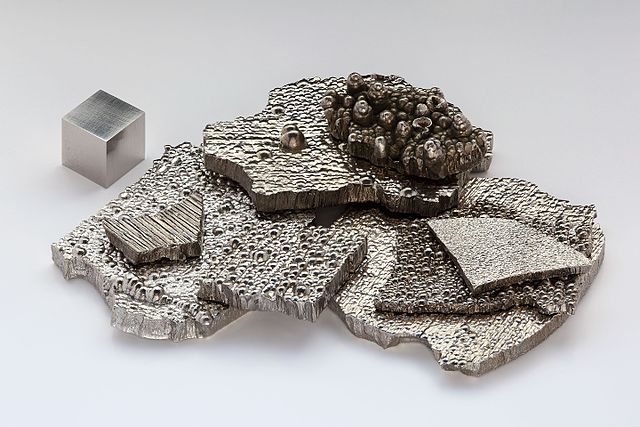 Cobalt is most commonly used in alloys and batteries. Aside from some notable spikes it tends to trade around $15 USD per pound.

Cobalt is a chemical element with symbol Co and atomic number 27. It is a transition metal and is ferromagnetic. It is a hard with a silver to bluish-gray color. Used throughout antiquity as blue coloring for pigment, it was used to paint ceramics and glass. Cobalt was first isolated in 1735 by Georg Brandt. Its name comes from kobelt or kobold (German for gnome or spirit). It is used in a number of items but primarily in alloys and superalloys.

Radioactive isotope cobalt-60 is synthetically created in nuclear reactors It is used as a radioactive tracer as well as for producing beams of high-energy gamma rays to treat cancer using external beam radiotherapy machines.

With the increasing demand for electric vehicles, there is a growing need for lithium-ion batteries. This demand coupled with concerns about supply have pushed the LME and some companies to ensure the resource is sourced ethically.

The use of cobalt-containing ores in pigments has been seen in artifacts dating back over 2600 years ago. Evidence of this has been found in Egypt and in Persian. Aside from applying a blue hue to ceramics cobalt was used to give glass a similar color as well. Its name comes from the word kobelt (medieval German) which was given to gnomes, or underworld spirits, that were believed to be living in the Schneeberg Mountains of present day Germany. At that time, silver was the main metal of interest for mining in these mountains. When problems arose in regards to separation and smelting, the "kobolds" were blamed. Later on it was found out that the cobalt complicated the refining process.

Swedish chemist Georg Brandt credited with first isolating and discovering it in 1735. Even though used in antiquity as a blue pigment for glass and porcelain, this was the first time it was isolated and identified as an element. It took another 50 years for the element to be verified. Around World War 1, cobalt's metallic uses were studied and patented leading to a large increase in is use from superalloys to magnets.

Cobalt is ferromagnetic element and has the highest Curie point of the three common ferromagnetic elements (iron and nickel being the other two). It is a hard, silver to bluish-gray metal with a metallic luster. It reacts slowly to mineral acids such as HCl, HNO3, and H2SO4 and in moist air, but at a slower rate.

Cobalt is not considered a rare metal as it ranks 32nd in global abundance. Its pure form, however, does not naturally exist on earth. Instead, it is combined with other elements such as nickel, copper, and iron and only accounts for 0.0029% of the earth's crust. Because of this it is almost always a by-product of the mining of these base metals (predominantly nickel and copper mining). It is primarily found in ores such as sulfides with around 55% of global production comes from nickel ores. Sole extraction of cobalt comes from Moroccan and some Canadian arsenide ores. Apart from these magmatic sulphides, other common deposits are sediment hosted and laterites. Some minerals that contain cobalt are erythrite, skutterrudite, and cobaltite.

There are several methods extraction from copper and nickel based on the type of ore and the amount of cobalt in the ore. One such method is froth flotation; a process of separating hydrophobic materials from hydrophilic materials. The first stage is the 'roughing' stage aims to remove the maximum amount of the largest course size of particle. It is then 'cleaned' to produce a higher concentration grade. Finally, the 'scavenger' stage aims to recover target minerals that were not recovered in the roughing stage. It is possible that these stages can be returned to in any order and for multiple times.

Other methods of extraction are smelting and leaching.

Cobalt is most commonly used in alloys and superalloys. One such example is alnico, which consists of aluminum, nickel, and cobalt and is used to create powerful permanent magnets. Because of cobalt's high Curie point, adding moderate amounts to nickel increases the limit of the material's magnetic properties. many forms of magnetic steel, and some types of stainless steel.

Another use in alloys is the addition of strength and corrosion resistance for high temperature alloys as required for gas turbines and jet engines. Another use is as a catalyst to convert xylene to terephthalic acid and in the Fischer-Tropsch process. It can be used for the hydroformylation of alkenes, but is not as efficient as iridium- and rhodium-based catalysts.

Cobalt is used in the production of lithium-ion batteries. Its inclusion helps to boost a battery's energy density as well as extends its life. Another added benefit is that it prevents cathode corrosion, which can cause a battery fire.

The vitamin B12, as called cobalamin, is the only vitamin that contains a metal. Vitamin B12 is important for a normal functioning nervous system and is required for the proper development of red blood cells.

Cobalt-60 is a radioactive isotope that is synthetically created in a nuclear reactor. It is a source of gamma rays used to treat some forms of cancer through external beam radiotherapy. It is also used a radioactive tracer.

The London Metal Exchange is the world center for industrial metals trading. Similar to ferrous, non-ferrous, and precious metals, cobalt is traded on the LME like other commodities listed. There are two types of contracts listed on the LME: the LME Cobalt and the Fastmarkets MB. The Fastmarkets MB was created for cash settlement so when the futures or option contracts expire or exercise, the cash position transfers not the actual physical underlying asset. Aside from cash trades, the LME has the ability to trade cobalt futures of 3 or 15 months, and 1, 2, 3, 6, 12, and 15 months for the Fastmarkets MB contracts.

Benchmark was founded in 2014 as a regulated agency specializing the lithium-ion battery to EV supply chain. Because of this, they are focused on the raw materials used to produce lithium ion batteries (cobalt, graphite, lithium, and nickel) and well as price data for anodes, cathodes, and battery cells.

Due to its usefulness in alloys and superalloys, there has always been a steady demand for cobalt since the beginning of the 20th century. Now, with increasing EV demand comes an increased demand for lithium-ion battery production. Trends show that there has been a decrease in conventional passenger vehicle sales and an increase in EV sales, thus increasing battery demand. Almost 50% of demand comes from the battery sector.

A lesser known With the increasing price of precious metals used in catalysts, there is an attempt at replacing them with a cheaper alternative.

Cobalt's production volume is highly correlated to the production volume of copper and nickel. Because of this, any increased in demand is not necessarily met with an increase in production and extraction. The global supply and reserves appear to be decreasing over the past few years.

The global reserve amount of cobalt is estimated at just over 7.0 million tonnes, with the Democratic Republic of the Congo holding approximately 3.5 million tonnes, corresponding to about 50% of the global reserves. The political sensitivity of the country adds concern that global demands might not be met. Because of this and many other reasons, the U.S. government sees this resource as strategic and critical to U.S. security.

As done throughout history, recycling has always been an option to re-purpose and reuse materials. Lithium-ion batteries and various alloys are currently recycled to extract needed metals to be reused to meet cobalt's growing demand. Because cobalt's structural integrity does not deteriorate it is infinitely recyclable. Scrap metal can be remelted to contribute to the creation of new products.

Since cobalt is added to create alloys, there are no scrap prices for it directly. Instead, scrap prices for items containing valuable commodities are given a price based on the composition of scrap metal. With the growing demand a secondary market is merited.

Commodities market pricing data shows that the price has tended to remain between $10 and $15 USD/lb. LME pricing data shows that the historical average price is around $30,000 USD/tonne. Even though cobalt's production amount is based primarily on nickel and copper production, there appears to be no price correlation among ferromagnetic resources nor among the prices of other commodities, with the exception of lithium. Seeing as they are both involved with electric vehicles, this is not a surprise.

In general, cobalt prices have remained relatively consistent with a low frequency of price spikes. The largest of these was in 2018 when prices broke $40 USD/lb. In 2021, the cobalt price broke $25 USD/lb