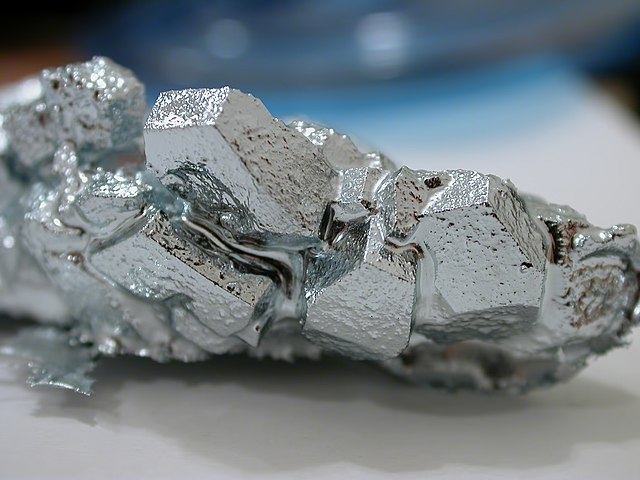 Gallium is a rare metal that melts at room temperature. It is primarily used in electronics.

Gallium is a chemical element that is soft and silvery. On the periodic table, gallium is represented by the symbol Ga and the atomic number 31. It also falls into Group 13 (IIIa, or boron group). It is one of only 5 metals that can liquefy at slightly above room temperature.

The History Of Gallium

In 1871, the Russian chemist Dmitri Mendeleev predicted the existence of gallium but called it "eka-aluminium." Four years later, in 1875, the post-transition metal was discovered by a French chemist named Paul-Émile Lecoq de Boisbaudran. Not knowing about Mendeleev's prediction, the chemist did not keep the original name. Instead, he named the new element after his native country. "Gallia" is the Latin word for France.

Gallium resembles silver or aluminium. The element is also a very unique metal. Although solid at room temperature, the metal is soft enough to cut apart. Its melting point is so low that it often melts in a person's hand. Once it turns into liquid metal, gallium's colour is silvery white. Its boiling point is very high at 2,204 C (3,999 F). At very low temperatures, gallium shatters like glass.

The metal has 32 isotopes of which only 2 are stable and occur in nature. While it easily alloys with some metals, gallium can also make others very brittle. When mixed with metals like aluminium-zinc alloys or steel, gallium weakens them considerably by diffusing their grain boundaries.

The Health Effects of Gallium

The radioactive isotope Ga-67 is used to detect infection, inflammation or cancer in patients. A condition named hypercalcemia is also treated with gallium nitrate to find tumors. Although gallium is considered to be non-toxic, constant exposure or large amounts can cause breathing difficulties and other serious ailments such as pulmonary oedema and partial paralysis.

Gallium is not found in natural abundance. The element exists in trace amounts inside deposits consisting largely of other minerals. These include coal, bauxite, germanite, and zinc ores. The metal is very rare and only accounts for about 0.0019 percent of Earth's crust. It is also the 32nd most abundant element present inside the crust.

Besides its applications in the medical field, gallium is mostly used in electronics. Roughly 95% is used to create gallium arsenide (GaAs). The latter is an essential component in circuits, semiconductors and LEDs. Gallium is also used to make alloys with low melting points. Due to its liquid properties, it is also a safer choice than liquid mercury to be used inside thermometers and barometers.

Gallium is almost exclusively extracted as a byproduct of zinc, aluminium and other metal mining. It can be separated from other metals by smelting or electrolysis using a solution of gallium(III) hydroxide in potassium hydroxide. The biggest producers of gallium are China, Germany, Kazakhstan and Ukraine. Annual production is estimated at about 200 metric tons per year.

Due to its extreme rarity and wide applications in technology, gallium remains a sought after commodity in modern times. Gallium ingots are traded globally and gallium futures are also obtainable from the Shanghai Metal Market (SMM).

How Are Gallium Prices Established?

The rarity of gallium is a strong factor that determines the asking price of this metal. But another influence is the rate at which China produces the metal and also how much gallium they have available. As the world's biggest producer of aluminium (and therefore, gallium as a byproduct), China's output can heavily influence the demand and price of gallium.

During the last few years, specifically 2019 and 2020, a combination of the effects of Covid-19 and delays in mining operations and inspections led to a shortage of bauxite in China. This shortage led to a spike in the price of gallium.

The Price of Gallium

There are charts of Gallium prices available for investors who want to view the historical and current data of the metal. Online resources often show the price of gallium in the Chinese yuan but also the US dollar. Prices can vary as the rare metal is not just sold on the metals market but also by companies and commercial retailers (like Amazon) who sell gallium directly to consumers in different quantities.

Overall, gallium is sold at 99.99 percent purity and its weight unit is per kilogram. Like many commodities, in 2020 the price of gallium jumped from an average of around $150 USD per kilgram to around $300 USD/kg, peaking at almost $400.