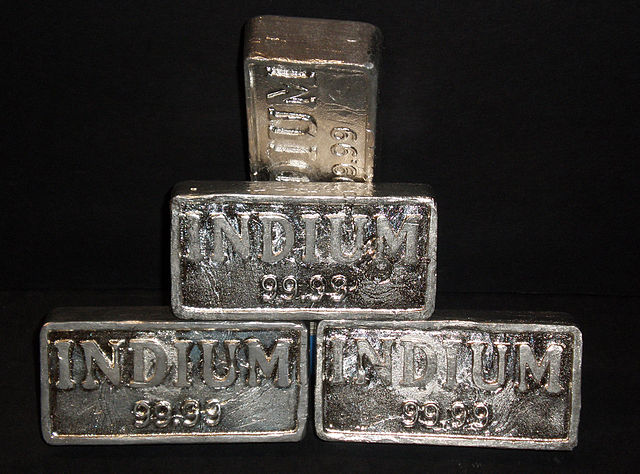 Indium is a rare metal that is used as a stabilizer of non-ferrous metal alloys and in electronics.

Indium is a silvery-white chemical element. it resembles silver or aluminium. On the periodic table, it is recognized by the symbol In and it has the atomic number 49. It is known as the softest metal that is not an alkali. Indium also belongs to Group 13 (IIIa) of the periodic table which is the Boron group.

The History Of Indium

In 1863, Ferdinand Reich discovered indium. While working at the Freiberg School of Mines in Germany, Reich was searching for the element thallium inside a sample of the mineral sphalerite. He extracted a yellow substance which he mistook for thallium sulfide.

However, when he asked a colleague, Hieronymous Richter, to review the discovery, they found that the substance was a new metal. Under an atomic spectroscope, they noticed it had an intense violet color and this led to the naming of the metal. The Latin worked "indicum" means violet.

Richter later claimed that he was the discoverer of indium but history rightly marked Ferdinand Reich as the person who brought to light the existence of the metal.

The first practical use for the metal only came in the 1930s. During that time, it was mainly used in the creation of bearing lubricants for aircraft.

Indium is a silvery metal that is soft and malleable. The metal is stable in air and water. However, it can dissolve in acids. It has a melting point is 156 °C (313.88 F) and its boiling point is 2000 °C (3,761.6 F). When indium is exposed to temperatures higher than its melting point it bursts into violet-colored flames. Indium has 35 known isotopes, 1 of which is stable and 2 occur in nature.

The Health Effects of Indium

Indium compounds are extremely toxic and cause organ damage in humans. In particular to the kidney, heart, and liver. A few milligrams can also negatively affect the development of a foetus. There is limited study on what other potential risks indium can pose to people and health professionals advise extreme caution when dealing with the metal.

Indium is a rare element and it represents only 0.1 parts per million in the Earth's crust. It is also the 69th most abundant element in the crust. Most of the world's indium comes from China and Canada but to a lesser extent, it can also be found in Siberia. Pure deposits of indium are exceptionally rare and the metal is more commonly found in ores that consists of a majority of zinc minerals, lead, iron and copper.

Indium is also used to produced low-melting fusible alloys and protective plating for metal surfaces. It is starting to be used in the solar panel industry as well. The metal also assists in the creation of mirrors with corrosion-resistant surfaces while foils of indium are deployed to assess the conditions inside nuclear reactors.

Other areas of use for indium include rectifiers, thermistors, photoconductors, semiconductors, bearing coating, solders and fuses, light filters in sodium vapor lamps, and electroplating (especially for high-performance components in engines).

Canada is the main producer of indium and the metal is extracted as a byproduct of mining other metals. It is mostly recovered by smelting zinc and lead sulfide ores. The yearly production of indium metal is roughly 75 tonnes per year and the world's reserves are estimated at around 1500 tonnes.

Due to indium's uncontested dominance in the use of LCD electronics and its wide applications in other fields, the metal remains vital to the global economy. It is sold by metal companies and on the Shanghai Metal Market (SMM).

How Is Indium Traded?

Investors can purchase indium futures. They are offered to customers by the Shanghai Metal Market (SMM). The metal can also be purchased in its physical form, usually in ingots that are between 99% and 99.99% pure indium.

Some commercial companies offer indium in different forms including pellets, rods, powder, discs, pieces, granules, wire, and compound forms (for example, an oxide). Weight varies but is often listed in kilograms and the US dollar is perhaps the dominant currency used to list and purchase the items. Other currencies include the Chinese yuan.

How Are Indium Prices Established?

The price of indium tanked in 2015 after the collapse of China's Fanya Metal Exchange (FME). The spot price remained subdued for a long time unit 2017 when crude indium reached a high of $270-290 per kg in November. The recovery of indium prices hinged largely on zinc mining supply disruptions in China, which led to a reduced amount of indium being recovered as a by-product. By 2017, indium production fell by 20%, which also strengthening the spot price of the metal.

Historically, indium prices have also been weakened at times by stockholders who reduce the asking price of their offers. Overall, when producers outside of China are sold out, Chinese producers can often determine the spot market for indium.

The Price of Indium

The purchase price of this metal depends on the quantity and purity of the product. Before buying, investors can view historical charts only to gauge the metal's performance. These price charts can be summoned to view statistics on a daily, weekly, and yearly basis. Some charts can also go back as far as 50 years.