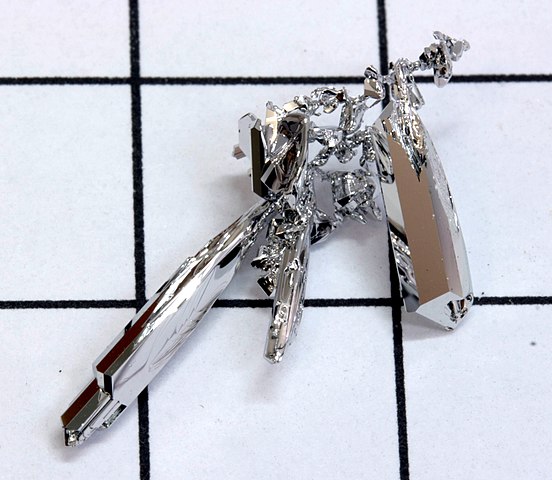 Ruthenium is a rare metal from the Platinum Group.

The chemical element ruthenium is a rare metal in the platinum metals group. Categorized within the periodic table's Groups 8–10 (VIIIb), it has the symbol of Ru and the atomic number of 44. Ruthenium is silver and closely resembles platinum but the metal is harder, more brittle and rarer.

In 1807, a Polish scientist named Jedrzej Sniadecki claimed that he had produced ruthenium. However, he was forced to retract his story after other experts could not repeat his success despite trying the same methods.

The man who was eventually credited with the discovery of the metal was Karl Karlovich Klaus who, after examining platinum ore, confirmed its existence in 1844. Since the ore came from the Ural Mountains in Russia and Klaus was a Russian himself, the new metal derived its name from the Latin word for Russia (Ruthenia).

Pre-Columbian Americans forged platinum and gold alloys to make ornaments. In this manner, they must have undoubtedly used naturally occurring platinum alloys as well. The latter is known to contain all the metals in the platinum group including ruthenium, rhodium and palladium. These blends were also used by European chemists from the 1600s onwards and thus recognized by them in a way. However, platinum was not officially recognized until the mid-18th century and ruthenium not until much later.

Ruthenium is a lustrous metal that resembles silver or platinum. At room temperature, this hard metal shows paramagnetic qualities and remains untarnished by air, water and most acids. It will dissolve in alkalis.

Ruthenium tetroxide (RuO4), in particular, is highly poisonous and often explosively volatile. Ruthenium 106 was used in nuclear tests from 1945 to 1980 and could cause increased cancer rates in those areas for decades. Overall, all ruthenium compounds are regarded as toxic and carcinogenic.

Ruthenium is the sixth rarest metal in the world and accounts for 0.0004 parts per million of the earth's crust. Ruthenium is mostly found within deposits of other platinum group metals that include platinum, osmium, iridium, and palladium.

The most common native ores come from South Africa, the Ural Mountains in Russia, North America and South America. In a lesser way, ruthenium can also be found as a byproduct of nickel mining and this is mostly seen in Canada.

Ruthenium plays an important role in the modern world. Found in different types of technologies, the metal is mostly used in electrical contacts and chip resistors. In the chemical industry, ruthenium is a versatile catalyst used in chlorine, ammonia and acetic acid production.

Ruthenium is also used to alter other metals in a positive way. For the most part, it is used to harden palladium and platinum. But blending 0.1% ruthenium with titanium also greatly increases the latter's corrosion resistance by roughly 100 times. The jewelry business also uses a ruthenium-platinum alloy due to its attractive silver finish.

In order to isolate it for commercial use, ruthenium must undergo a complex chemical transformation. Producers rely on a process that uses hydrogen to reduce ammonium ruthenium chloride. The result is a powder that is returned to a solid state using argon-arc welding or powder metallurgy techniques.

Another source of ruthenium is spent nuclear fuel. The latter offers about 2 kilograms of ruthenium per metric ton. One drawback is that ruthenium extracted in this manner has radioactive isotopes with a half-life range as long as 373.59 days. In order to become stable, the metal must be stored in a safe place for a minimum of ten years.

The production rate of ruthenium per year is on average around 30 tonnes. It is also estimated that the world reserves of this rare metal are 5,000 tonnes.

Similar to the other platinum group metals, ruthenium is a valuable commodity in today's world. The demand is driven by several factors but it is mainly because ruthenium is rarer than gold and also the metal's useful applications in different technologies. The metal is often sold in the form of bars, foil, powder, rods, and crystals.

How Are Ruthenium Prices Established?

The price of ruthenium is not just affected by its scarcity and demand but also by the current events happening in the platinum industry. For example, in 2021, worker strikes at South African platinum mines caused the prices per troy ounce to rise due to less metal being brought to the surface. The resulting rise affected the prices of both platinum and ruthenium.

Ruthenium prices are also sensitive to changes in the world's high-tech economy due to the metal mainly being used in the production of chip resistors. But in the last few months, the market ruthenium price has skyrocketed to heights not seen before in many years. The main driving factor behind this spike is the periods of unrest in South Africa's mining industry.

Investors can rely on professional online charts to keep track of price changes that happen on a daily, weekly, and monthly basis. On some sites, there is also a 10-year history available that follows the asking price.

The most common ruthenium price unit is the troy ounce and the main currency is the US dollar. However, it can also be viewed in Euros and other denominations. The sales weight on charts is also sometimes shown in kilograms and metric tons.